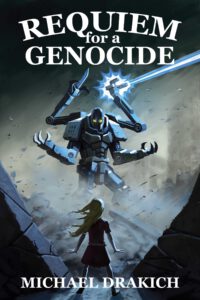 A welcome change from romance literature I usually read and review was the recent SF novel “Requiem for a Genocide” by Michael Drakich. I was really glad to receive an ARC copy from the author, who asked for an honest review in advance of the December publication of his book because I like reading SF a lot (Asimov, Clarke, Gibson, Lem, Strugazki brothers… you name it, I’ve read it, and now to add to the list – Michael Drakich!).

I will skip my usual rating system for this book and go straight to the point.

The main character in this book is a sentient warbot with four arms, the last of his generation, who is used in battles between two alien nations on the planet Mervos. Later on, the two nations unite and decide to use their warbots to kill some humans that happen to live among them – and that’s where the story takes off.

Although our robot is a murderous machine, he has feelings, an ability to learn and is loyal and brave. He also wants to be free from the robotic laws, hates loneliness and losing friends, and does not want to die. I could totally relate to that (minus the robotic laws, I guess). I liked him, as well as the human girl he was trying to save throughout the book. As their relationship developed, and he changed through his interaction with the girl, I liked him even more. Because I became so invested in these two characters, I enjoyed the book despite some of the problems I had with the world-building.

One other thing I liked was the representation of humans in the book as nice, compassionate, and not aggressive, supportive of other civilizations they encounter, in contrast to the way they have behaved throughout real history. I liked the idea that in the distant future when humans have discovered how to travel between the stars, they have also discovered how to be nobler, less destructive and less profit-orientated.

Coming to the weak sides of the story – I did not entirely like the world-building, as I mentioned. The planet Mervos is too much like Earth – the aliens are smaller, amphibian-like, have three fingers, but other than that, everything has a feeling of the rural USA, including farmhouses, small cities, living rooms with sofas, cars and shops and police stations. Even the clothing is similar. I would have liked greater differences there. Why does this alien civilization use an alphabet and a numeral system identical to the human ones? Also in naming their robots? A bit more fantasy from the author in inventing new worlds and aliens would have made the reading experience slightly more rewarding.

A warm, intelligent story with lovable characters and a lot of action, but with an alien world that is not alien enough to be called alien.