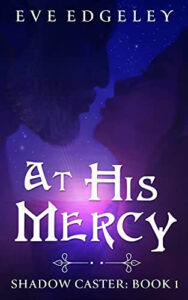 I have grown somewhat tired of Greek billionaires and aliens, so for a change I decided to read something from the realms of fantasy. Fantastic creatures, magic, and a bit of romance – the next book on my list promised all that and more with the title “At His Mercy” and a subtitle Shadow Caster: Book1.

As before, to try to give an honest evaluation of all the books I read, I have decided to make several categories and give stars for each of them, plus the comments. Five stars is the maximum. The mean value from all categories will give the final review in terms of star numbers.

The Book: “At His Mercy”

Star rating so far: None at all! I’ll be the first one to comment on this book.

The book says cover design was done by Sara Porter and although design itself was not the worse one I’ve seen, it is a bit simple – a stock photo, a bit of photoshoping, and some fancy letters, all in dark tones as befitting the shadow caster. I see some space for improvement there.

Spelling and formatting are practically immaculate – which can’t be said for the heroine, especially after the dark elf has had his way with her (hark, hark). OK, I’ll stop my pitiful attempts at humor here and just say that the book is very decently written and as decently edited, although I was a bit put off by all the italicized words (which was used to emphasize them, I guess – but that’s my personal taste). The language is also OK, with words such as “brow”, “debauched”, “opportune” and, of course, “manhood” to add to the feeling that we are, indeed, dealing with the fantasy world, populated with mages and dark elves, who are mythical creatures excelling in bdsm and equipped not only with pointy ears, but also with impressive manhoods, apparently (a certain video by Cindy comes to my mind).

Plot is straightforward and simple. Considering that the whole novelle is only 68 pages long, there is no time to lose, so the story goes straight to the point – Emari, a virgin mage, is kidnapped by dark elves, and left at the mercy of the Dark elven Prince, as the title already warned us would happen. He likes to torture his prisoners by forcing them with his magic to repeatedly orgasm, which seems to be a much more efficient method of extracting information than, let’s say, waterboarding. But, Emari has a secret of her own – she is a so-called mind mage, meaning that upon touching somebody, she can enter their minds and control them. Needless to say, the Dark Prince touches her eventually, with the full length of his manhood, which seems to be enough for her to establish control over him, but also to see the truth about dark elves, which puts her own people in not so favorable light.

I’ll stop here so as not to reveal everything (like Emari). Let’s just add that in the end the things develop in such way that humans and elves make an attempt at peace, which enables the two lovebirds to finally be together.

Was the plot engaging? Definitely! On the scale of 1 to 10, where 10 is the hottest male character ever, the Dark Prince is probably 11. Emari is also cool and not only a wildcat as the Prince likes to call her, but a smart and compassionate person. Was the story believable? Mhmmm… kind of, but not always. Like, Emari takes control of the prince and after she has read his mind, basically, he, instead of killing her, or at least locking her up and throwing away the key, decides to release her. Because the elves are such gentlemen. And he does that after several pages of him telling her that he wants her to submit to him, that she should beg him (for sex), and that he will split her open (don’t ask). I would have been happier at this point if Emari had really managed to get away on her own, by controlling him. Also, later, another guy is introduced, making this a kind of unsuccessful love triangle, but it was just too short a story for the third guy. I didn’t really need him, and he didn’t have much to say anyway. The whole politics in the end was also kind of hard to believe, but OK, maybe I’m being overly picky.

Even though the story is relatively short, the characters are surprisingly well developed. We get glimpses of the history and the past of the Dark Prince, and Emari’s background is also mentioned (although the whole dating problematics that Emari was facing was more fit for a modern-day college than for the Temple City Academy of Magic). I didn’t like his name much – Toth reminded me of Tooth, which kind of spoiled it for me a bit. I also did not enjoy the whole dominant male thing, but that’s my personal taste, and if that’s what turns Emari on, well who am I to complain.

I liked how Emari and Toth went from being mortal enemies to longing for each other, but the opportunity to make this story more complex and engaging was, unfortunately, not used by the author, who has opted for making everything much simpler and too short (unlike other things…) Maybe in the next books the plot will get more complicated. I am looking forward to reading them if that turns out to be the case.

For this type of fantasy romance, where Elves are well endowed and are not afraid to show it, and women are tough but like to submit to their partners in bed, it is a well-written book. It would have been even better if it was longer and more complicated. Such as it is, I have a feeling I have not read a book but the first chapter of it, which was rushed at some points (the story covers a period of 4 years!). Probably it is a way for the author to earn money, but I am still a fan of books being called books and stories being called stories.