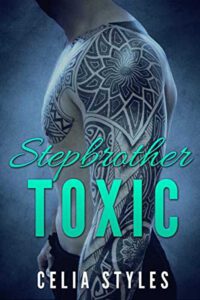 Another book (if you can call it a book) I came across is “Stepbrother Toxic” or “Toxic Stepbrother”. I expected a somewhat extended read, but it is in fact one relatively short story, with a couple of excerpts from other stories of the author. Therefore, my review will not be extensive either.

As before, to try to give an honest evaluation of all the books I plan to read, I have decided to make several categories and give stars for each of them, plus the comments. Five stars is the maximum. The mean value from all categories will give the final review in terms of star numbers.

Publisher: as far as I could tell, self-published

Page count: 26 (officially, 63, but the rest are excerpts from other stories)

A half-naked guy, with an obligatory tattoo, probably representing the stepbrother. OK, as such covers go. Why is the title written as “Stepbrother Toxic”, whereas the real title is “Toxic Stepbrother”, I don’t know. Also, what’s toxic about the guy in the story is beyond me. The stepfather is toxic, for sure, but the stepbrother is anything but.

Language is OK. I noticed only a few spelling mistakes. No ellipses, but a lot of em-dashes, as well, in the middle, at the end, and sometimes at the beginning of the sentence.

Whereas the beginning of the story is not so bad, and I can understand how the girl hooks up with the pretty surfer boy and even agrees to have sex with him half an hour later (protected, I sincerely hope), the writer lost me at the later point, when we find out that (SPOILER) the pretty boy is the son of the man the mother of the main character married. Despite being a stepbrother and a stepsister (by marriage), our two main characters decide after three days of acquaintance to start a family, which indeed happens a few pages later. I’m sorry, but I can’t believe that anyone in their right mind, and no matter how good the sex was, would decide they have found their soulmate and the mother/father of their children after 72 h of knowing someone.

Some of it is present, but there is simply not enough pages to develop anything. We are mostly informed throughout the text about the past, and the plans for the future, as we are later on informed about how the life of our two main characters proceeds after they elope to Hawaii. Due to it being compressed to only a couple of pages, I had a feeling I was reading a Wikipedia article instead of a romance story.

Regarding the characters, the main female character is nice and relatable, and her stepbrother/boyfriend is cute. A bit lost, definitely uneducated (he quit school at 17), although properly sculpted, due to his passion for surfing, and not in the least toxic. What annoyed me was that after knowing the girl for the whole of three days, he, upon meeting her mother, immediately claims he wants to marry her (the girl, not the mother). Why? How? Also, the whole naughtiness of them being together, even though they are related (they are not)… I simply don’t get it. I also don’t get how any decent, loving mother, would allow her new husband to hit her daughter and not say a word about it. Excuse me? No matter how rich you are, you slap my kid, we’re done! Considering how close mother and daughter were described to have been, I could not believe that such an act of physical violence would be tolerated by the mother, and also that she would continue to ignore her only daughter in the days to come, only because her psycho husband said so.

The writing style is not bad, but the story is rushed, and I did not have time (nor much desire) to get invested in the characters. At all. Too much cardboard, too little flesh. Also, paying 4.57 $ for what is essentially 26 pages story plus a bunch of excerpts is a rip off. Sorry, it is. There are so many full-length books out there costing less, and although quantity does not necessarily mean quality, I still find it uncool to bait people like that.