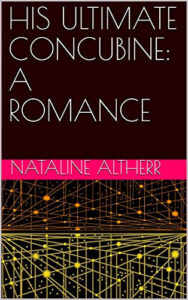 A longer book this time, “His Ultimate Concubine: A Romance” is a contemporary romance novel exploring the inner worlds of a Greek billionaire and a daughter (and sister) of his sworn enemies. They both have hidden agendas in the beginning, but love conquers all, even the completely misplaced efforts of the male MC to take revenge on the unsuspecting female MC.

As before, to try to give an honest evaluation of all the books I read, I have decided to make several categories and give stars for each of them, plus the comments. Five stars is the maximum. The mean value from all categories will give the final review in terms of star numbers.

The Book: „His Ultimate Concubine: A Romance”

Star rating so far: Three 4* reviews on Amazon and one 4* review on Goodreads

You can check it out for yourself, but this cover is better suited for a cyber punk SF novel than for a romance. Where’s a naked male torso? Or a yacht? Blue Mediterranean sea with scattered green islands? Or the sea, with the yacht, with the naked guy on it (I feel I’m on to something here). But honestly, I’m not trying to claim I know anything about design (I don’t), but I don’t find this cover very appealing or appropriately representing the content. Interestingly, the same publisher has put out several romances, on the same date (plus minus a day) and all have a similar cover design. Was the budget tight? Or are they trying to maximize the profit? I chose to read this one, because I liked the word concubine (what can I say, it sounded so dramatic). Turns out it’s just another word for a mistress, but we’ll get to that later.

With very few spelling and grammar mistakes, this is the best-formatted work I’ve read so far. What jarred me somewhat were the dialogues. They were often interrupted by explanatory paragraphs, or several sentences depicting what the characters felt or wanted to do at that moment – she was usually busy comparing him to a dragon, and his thoughts mostly revolved around taking revenge. This seriously affected the pace of the dialogues, so that I had trouble recalling what it was that the people were saying in the first place and had to go back to read it again. Another thing about the writing style that I noticed were many incomplete sentences, missing the verb or the subject, or repeating the last part of the sentence somewhat changed (“…as she had vowed she would never do. Must never do!” or “…and wondered how she could ever, possibly, survive this. Survive him.”), all applied with an aim to increase the drama. Which they did, but sometimes there was just too much drama for my taste. One final thing that was not so off-putting as it was funny – he was so often compared to a dragon and his chest was so often compared to a wall that I’ve lost count. For me, mentioning this once or twice would have been enough. The guy was dangerous and he was well-built – I got it the first time. Therefore, one star deducted, although this is a personal taste. If you like dramatic writing, than you’ll probably like this book a lot.

OK, some spoilers ahead. A common or garden Greek billionaire (or maybe not so common – after all, his life is anything but happy), a daughter from the family he hates, who has good reasons of her own to become his mistress (or concubine). She plans to do that without actually going to bed with him, which, of course, does not really work out. He, on the other hand, wants his revenge, because her father and brother have destroyed his family. So far so good, and I could feel with them and totally understand his motives as well as hers. Until the point when it is revealed that his family was treating him essentially as a mop, but he still feels obliged to revenge them on her, who hates her brother and father anyway, so not only is his revenge pointless, but he is taking it all out on a completely wrong person. I think even he realized that at some point in the book. So, yes, a lot of drama there, easily avoided if the characters invested some time in thinking, but then, there would be no book if that were the case.

One other point of critique: Why is his name in the book Abby, whereas the book description on Amazon says he is called Nikos? And what kind of a Greek name is Abby? I’ve never met a Greek guy called Abby, and I’ve met quite a few of them. No billionaires, though, to my chagrin.

As mentioned above, I really liked the characters. The Greek billionaire starts as a cruel, vengeful person and is in time transformed through his love for her (although, with some emotional intelligence, many tears could have been avoided). And, she remains true to her character and forgives him almost everything. If there would be something to complain about, it would perhaps be the depiction of the supporting cast – her brother, who seems to be a very one-dimensional villain, and her mother, who seems to be outright stupid.

Characters are interesting, the story can keep the reader’s attention for a while, however too much drama and jerky dialogues spoil the effect somewhat. For those who like this kind of romance, where revenge plays a major role, but love conquers in the end, it is a solid read.